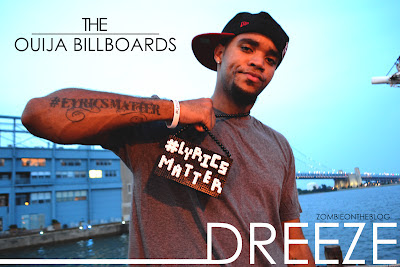 Here at the Ouija Billboards you know you can find the dopest interviews. We Ran into the upcoming artist known as "Dreeze". He tells us about his new brand, his outlook on the game, competition in there and more. Take a look.
ZOTB: So Tell Us About Yourself And Who You Are.

Dreeze: Well I go by Dreeze “The Lyrical Assassin”, i’m an artist out of Burlington City, NJ.

ZOTB: So Where Did You Get The Name Dreeze From Was It Giving To You Or You Came Up With It Yourself ?

Dreeze: Good question. The name Dreeze itself came from a homie of mine i went to school with, “Kareem Boston” and it started cause i only shot 3’s on the basketball court and my gov is “Dre”. So dre and 3’s is “Dreeze” lmfao.

ZOTB: Lol That’s Dope. So We’ve Got Word That You Have A Project On The Way Can You Touch Basis On That?

Dreeze: It’s my 2nd SOLO project, titled “What Did You Expect”, the second installment of a 3 mixtapes series to expect from myself, in brief it features a few of the local artist i work with in the Tri-state area, as well as a slew of producers that include; mike zombie (lol), Tana, Jerz and The Fatman, Algorythm, and a few more.

ZOTB: Word So When Can We Expect “What Did You Expect” ? Lol.

Dreeze: See its catchy right? The mixtape will drop in hard copies on August 26th at the mixtape release party in Philadelphia, and digital copies will be available on various mixtape sights soon there after.

ZOTB: So how do people get into the mixtape release party and where exactly in Philly?

Dreeze: The release party will be held Sunday August 26th at Azure Ultra Lounge, 1439 South Street Philadelphia, Pa from 9pm-2am, It’s a closed event so you have to purchase tickets in advance by myself or the other performing artists or by them at the door, no age limit but must be 21 to drink and proper ID required, no dress code.

ZOTB: Word I’m Pretty Sure The People Are Gonna Be Looking Forward To That. But Dreeze You Know Us Here At The Site Are On Twitter Heavy. What’s All This “#Dreeze” Talk About?

#Dreeze: Thats funny you asked that, umm shout to twitter first n foremost im “@Mr_LyricsMatter” more popularly known as #Dreeze, man this shit started from a homie of mine “skat” or “@i_slander651” he basically helped and scarred my name at the same damn time, jus search the TT #Dreeze and you’ll understand more of what im saying, its an official TT by the way.

ZOTB: That’s Dope Lol So, You Also Have A Brand New Movement That’s Pretty Known And Getting Pretty Successful In The Streets Called “Lyrics Matter”. Gotta Hashtag That Lol. But Tell Us More About That.

#Dreeze: The brand name itself is pretty self explanatory, but what i mean exactly is, in hip-hop/rap as an ”emcee” not a rapper, your lyrics ought to be dope, truthful, witty, and above all YOUR LYRICS, It came to me because at this time in the game, lyrics don’t technically matter anymore to certain people to be considered, ”hot” or a dope artist, i feel as though your lyrics are what people should be more concerned about initially then get into the hooks, and so on and so forth.

ZOTB: Do You Think Artists Who Aren’t Crafting Their Music In This Fashion Are Taking Away From The Game Content Wise?

#Dreeze: Most definitely, i mean Ice-T jus dropped a movie called “The Art Of Rap” and he basically nailed it, the “emcee” in the game now is a lost art, When people first started “rapping” YOU HAD TO BE DOPE !!! there was no way around it or you wouldn’t even get a chance to grab the mic, now ANY AND EVERYBODY is a “rapper”.

ZOTB: Yeah Everybody And They Mom Is A Rapper Now. Being As You Like The Art Of Lyrics And How And Where To Place Your Words, Who Would You Want To Work With As Far As Doing Music? Locally And In The Industry?

#Dreeze: Locally nobody..... Nah, I’d like to definitely work with Big Ooh outta Trenton, as well as Flash who is outta south jersey as well, if we are counting philly artist cats like Chill Moody and Tayib Ali are also others I’d like to work with..... Industry, man... ummm of course Slaughterhouse, Black Hippys, Eminem, J Cole, Wale, Big Sean, kanye, Nas, the list goes on and on man.

ZOTB: Those Are Some Heavy Spitters, You Think You Can Keep Up With Em And Them Slaughter House Boys?

Dreeze: You interview guys are pretty predictable....lol, i believe bar for bar i could hang with just about anybody signed or unsigned, depending on who the audience is.

ZOTB: Lol Word. So Tell Us About Your Music Content And Your Sound. What Can We “Expect” Lol From Dreeze When We Hear A Track Or Project?

#Dreeze: Well this time around I’d say my song making ability has definitely stepped up, witty metaphors, over the head punchlines, and unorthodox bar construction is something i’ve picked up recently, from my last project to this one it’s clear growth as an artist, my content is pretty lyrical, always truthful, and i’d say my sound is very original, there is no one in the game you can say i sound like, least i don’t think so.

ZOTB: That’s Wassup. So Where Do You See Dreeze As An Artist In 5 Years?

#Dreeze: In 5 years I’ma be a household “hip hop” name, probably in the talks of the dopest “spitters” out, such as your, lupe’s and joe budden’s n such, maybe not at the top of the charts, but top of someones list.

ZOTB: True. Question. If You Were To Or Offered To Ink A Deal With Someone At This Moment, Who Would It Be And Why?

#Dreeze: And i could choose the label? I’d say either Shady records or G.O.O.D. Music. Shady because i know as an artist I could really let loose lyrically and it would be expected/accepted, and G.O.O.D. because i know i’d have a decent chance to be heavily marketed as a crossover artist and could excel in that “club rap” atmosphere and also remain lyrical.

ZOTB: What Drives You To Do This Music Shit, Family, Competition?

#Dreeze: The drive to write comes from within, its the love i have for the craft itself, the drive to succeed, well, shit we all want to live that “american dream “ life right ?, i have a lil one to provide for and im not about to have someone over my head tellin me what to do just to get money.

ZOTB: Ya Damn Skippy Bro. But I Wanted To Ask You Do You Have And Rap Rivalries “Beef” If You Will. Or Just Friendly On The Track Competition?

#Dreeze: I’m sure there are other artists locally that would consider themselves competition, but naw i dont have any beefs cookin at the moment, have ya’ll seen any “fucc #Dreeze he cant rap” tweets lately that i missed ?

ZOTB: Lol! Nope but if we do we’ll be sure to let you know. So basically you sayin you believe nobody can fuck with you lyrically?

#Dreeze: Haaa, so you just gon put the battery in my back (pause), and be sure to let me kno, cause i address EVERYTHING !!!!

ZOTB: You Ain’t Gonna Side Step That Question Lol.

ZOTB: Lmao. Dope So Tell Me About The “Chase Money Coalition” Tell The People What Exactly That Is.

#Dreeze: The coalition is.....i dont wanna call it a group, but its me and my homie “seanie bambino”, basically its 2 dope individual artists that fucc with each other on and off the mic, we have like interest in music and sort of identical stlyes, cept he’s alot more street, but still very lyrical.

ZOTB: Word. That’s Dope. So We’ve Been Researching You. You’ve Had A Tour? How Was The “Bus Life”?

#Dreeze: It succed ass !!!!.... Naw in actuality it wasnt bad at all, it was kinda dope with the shows i got to do, hotels were pretty dope, and it gave me a chance to see other cities in the country and get my music out to them directly, and giving them a chance to match face to voice instantly.

ZOTB: Did You Meet Any People That’s In The Industry During That Time?

Dreeze: On tour no, but i performed at the coast2coast convention in 2011 in miami and met a bunch of industry reps, A&Rs, nationally known DJs, signed major artist, and a few major producers.

ZOTB: What Artists? Or You Don’t Like To Name Drop?

#Dreeze: Nah i dont mind naming a few, No Malice formerly of the duo “Clipse”, Jae Millz, and Rockwilder and Ill-Mind for producers to name a few.

ZOTB: That’s Dope You’ve Been Making Moves I See, So I’m Sure The People Want To Know What’s “Next” For Dreeze.

#Dreeze: In addition to the tape dropping, ill be going on the road lookin to get into showcases, open mics, and looking to expand my brand up and down the east cost for now, ALSO, a major addition to the collection of music VISUALS will be coming soon.

ZOTB: That’s great man well it seems like Dreeze has a lot on his plate so give everybody your final send off and tell everybody where they can reach you at from facebook to twitter and all that good shit!

ZOTB: Dope We Appreciate You Coming Through And Fuckin Wit Us Here At The Ouija Billboards Any Motivational Or Last Words To The People?

ZOTB: Dope, We Look Forward To Hearing More From You!